What Is Candle Tunneling?

If you love candles as much as I do, you don’t want to waste a single drop of wax. When the flame begins to drop below the top-level of wax, leaving a dry, hard ring that just won’t melt, it’s called candle tunneling.

Novice candle fans might even think that’s just how certain candles are, but over time, especially with larger containers, the candle can become harder to light or it will go out, as wax burns from the top, and it might not relight at all. You can even lose your wick entirely. Luckily, there are things you can do to help your candles burn evenly and efficiently, with as little residual wax as possible.

How To Prevent Candles From Tunneling

The first burn and the size of the initial wax pool sets the stage for everything. The longer your candle burns, the bigger the opening for future use. You might not even want to trim the wick that first time if it’s a wider container because a bigger, hotter flame could be the only way to melt the wax all the way out to the edge. But smoke and soot are never good for the wax, so keep a careful eye out for problems like that. Once the candle has formed a melt pool all the way to the edge of its container, extinguish the candle and trim it back a little using a wick trimmer such as the one here.

Read More: Check out these glass candle holders that will accent your homes decor

Tunneling is not only ugly, it’s wasteful. There shouldn’t be dark soot on the glass, and it should melt cleanly and evenly for roughly 1\4 inch. Burn the candle one hour, for every inch in width, depending on the wax and its quality, getting as close to the edge of the container as possible. Repeat this complete burn occasionally, throughout a candle’s life, to keep the wax open and even. Too many short burns will cause problems as well.

“An ounce of prevention is worth a pound of cure,”  – Benjamin Franklin

If you never burn your candles for more than an hour or two, pillar and large poured varieties are not your most economic and labor-free choice. Taper, votives, and tealights might suit your lifestyle better or smaller, narrower jars.

Some candles are also just poorly made in the first place and will probably tunnel no matter what you do because the wick is too small for the jar, or the wax is of poor quality. This means you will have to fix them more than once, and you might have problems with both the wax and the wick.

Remember, expensive and well-made are not always the same thing. You’re looking for quality, not money to burn. A good candle maker knows how to balance the wick size, wax type, size, and scent to produce a superior experience, and that’s what you’re looking for, not a constant hassle.

How To Fix Candle Tunneling

Are you already in trouble? If your candle is only burning straight down the middle, don’t worry. There is a way to fix it, but I’ll warn you now, it isn’t pretty, so it’s always better to avoid the problem with the best good candle burning practices.

Read More: Here Are The Best Candles You Can Find On Amazon

If you try just removing the hard wax rim, it will probably tunnel again. What you need to do is to reset the wax memory, by wrapping the edge of the container or the top in a dome-tent of aluminum foil, with only a small opening at the top for air. Fold the foil over a few times to give it more structure and keep it in place. This will reflect more heat into the wax, but the sooner you step in to deal with the issue, the better, because too much liquid wax will drown the flame, and have to remove it. Below is a video using this very method:

Always watch this process carefully, so the entire thing doesn’t go up in flames, and don’t break maximum burn warnings from the manufacturer, or the glass might shatter. You might even want to do it in the kitchen sink, and be careful removing the foil. It will be hot.

If that doesn’t work, or you just get tired of burning yourself, you can always turn to a candle warmer like this or cut portions and melt the wax for its fragrance over a melt warmer. Hopefully, you’ll remember for next time, or buy something more suitable.

If you are looking for some good quality tea lights in bulk, check out the ones from Zion Judaica on Amazon!

Short wicks can happen if you accidentally cut it too low while trimming, or it can break off when you’re handling it. Sometimes, it’s just made poorly to begin with. Tunneling can also drown or shorten a wick, as wax melts over top. Even after you’ve solved your wax issue, you might still need to deal with the wick, and it’s easier to do so before the wax dries and buries it completely. If it has just fallen into the liquid wax, try rescuing it with a pair of tweezers and holding it until it can stand up on its own again.

You can try carving around the wick so you can light it, but this might set off a wax problem again, especially if you dig too deep. The best way to deal with a short or buried wick is to melt the entire surface with a heat gun, and dump out the excess wax.

But, if you don’t have a heat gun, turn the candle on its side and melt the wax onto folded foil, or a foil pie pan, as evenly as possible and without burning yourself. Again, I suggest you do this in the kitchen sink. Then, straighten out the wick with your tweezers if necessary, and relight the candle, burning it until the wax melts right out to the edge.

Fixing a Dirty Wick or a Flickering Flame

Soot and smoke marks on the glass are another common problem, caused by incomplete combustion, often because the balance or consistency is off with the amount of liquid wax being drawn up by the wick. If the flame doesn’t get the right steady flow of fuel, it will flicker or smoke. The type and quality of wax has a lot to do with this process too. Soy candles, for example, are particularly known for their almost soot-free quality.

Burning candles in drafty conditions, like near an open window, fan or outside will also increase soot because it disturbs the flame and fuel balance as well. Any time you see the flame bouncing and changing in size, there is a problem, and it can affect the overall lifespan of your candle and cause tunneling.

Using a hurricane vase or tall cylinder seems like an easy solution for drafts, but it can also rob the flame of the oxygen it needs. It will suck in more air from the top, but the heated air also needs to get out. This can actually cause air turbulence and a draft of its own, and the flame will flicker as a result. You might have noticed that the further down a tall container a candle burns, the more soot and smoke there is. This is what is going on and causing the problem.

The best draft shields are open at both ends, allowing you to raise the container up by half an inch. You can also buy candle toppers for jar-style containers to help regulate air flow. The most important thing you can do though is to properly trim your wick to about 1\4 inch each time you light your candle. If the flame starts flickering after it has burned a while, and there is no draft, put it out, and trim it again. 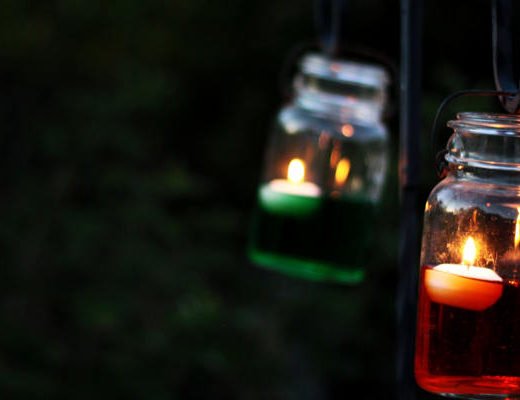 How To Clean A Candle Jar 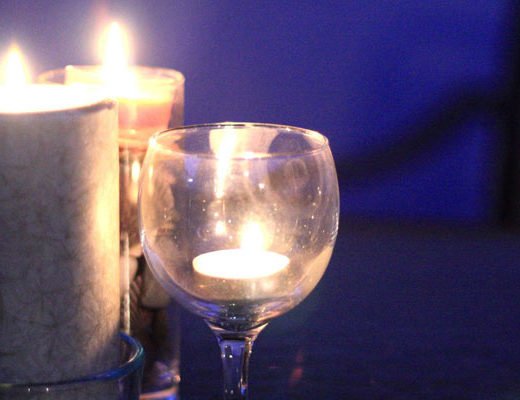 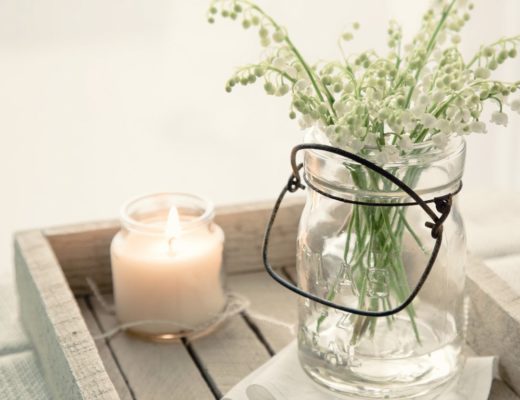 How to Make Candles That Boost Mood and Clear the Mind

This site uses Akismet to reduce spam. Learn how your comment data is processed.

Welcome to the Candle Junkies Blog! We are a collective of friends who all share a common love for candles. Join us as we test and share some of our favorite candle finds!

We just want to leave an additional reminder for everyone to please remember to not leave any candles unattended or burning in areas of the house with drafts. We all love candles but we must always remember the danger that comes with an open flame, especially indoors.

If you are not comfortable having an open flame inside your house but still want to enjoy candles, we recommend you check out wax melts with warmers or candle warmer lamps. For more candle safety tips read our post on safe practices and please be safe everyone!

We are able to manage our website’s upkeep costs and support our time that goes into reviewing and producing content through affiliate commissions on the purchases through our links. We strive to provide the most unbiased opinions as possible and go over what we like and dislike about every product we feature on the blog with regards to ratings we provide. We want to be as open and transparent with our readers as possible.

We obtain most of the products we review through purchases made with our own money but we also sometimes receive complimentary samples that we will then give our opinions on. For more on our policies please check out our disclaimer page.

We are a participant in the Amazon Services LLC Associates Program, an affiliate advertising program designed to provide a means for us to earn fees by linking to Amazon.com and affiliated sites.

If you see any glaring errors on a page within our blog please feel free to contact us and let us know. Our goal is to have the most accurate and up-to-date information as possible. Thank you.